Is CalFresh Food Stamps considered a public charge? Does getting CalFresh hurt my immigration status? The Trump Administration recently changed the definition of a public charge. This change is expected to go into effect on February 24th, 2020. In this post, we will explain the CalFresh Public Charge rules and what you need to know about the changes implemented by the Trump administration.

We will explain what the public charge rule is about, including recent history.

Additionally, we will review the rule changes by the Trump administration and show a chart comparing the old rule and the new rule.

Also, we will explain whether getting CalFresh makes you a public charge.

Furthermore, we will list the immigrants that are eligible for CalFresh who are exempted from the new public charge rules.

Finally, we will answer the most frequently asked questions about public charge and CalFresh for immigrants.

What is the Public Charge Rule?

“Public Charge” is a term used to describe an individual who is likely to become primarily dependent on the government for subsistence.

This dependence is determined if the person receives public cash assistance or use of long-term care at government expense.

The US Immigration Agents use the public charge test when someone applies to enter the U.S. through an immigrant visa or applies for permanent residence.

“Public charge” can be used to deny you entry into the United States or reject your application for permanent residence.

In deciding whether to grant some applicants a green card (permanent residency) or a visa, an immigration officer must decide whether that person is likely to become dependent on certain government benefits in the future, which would make them a “public charge.”

However, the public charge rule is not a test that applies to everyone, not even to all those applying for green cards.

The public charge concept was first established by Congress in 1882 in order to allow the U.S. government to deny a U.S. visa to anyone who “is likely at any time to become a public charge” — but without defining what “public charge” means.

Under the Trump administration, the “Public Charge rule” is being interpreted broadly to reduce the number of people who are eligible for green cards and other visas.

The Trump Administration did this by redefining what makes an individual dependent on government benefits — or “likely” to be in the future.

Since 1999, immigration officers have adopted the guiding principle that a public charge is someone “primarily dependent on the government for subsistence,”.

This is demonstrated by either (a) using public cash assistance for income maintenance or (b) institutionalization for long-term care at government expense.

Specifically, this has included:

The Trump Administration has recently changed the definition of a public charge.

This change is expected to go into effect on Monday, February 24th, 2020.

What Does the New Rule Include?

Here’s a table comparing the government benefit programs that were included in the old Public charge rule and what’s included in the new rule by the Trump Administration.

The implementation of the rule comes after a lengthy legal battle that delayed the rule’s original enforcement from October 15, 2019 until February 24, 2020.

However, on February 21 2020, the Supreme Court lifted the last injunction in Illinois, allowing for the rule’s enforcement nationwide.

A continued legal battle is expected, with lower courts set to hear lawsuits on the public charge determination in the upcoming months.

As the Supreme Court only ruled on the injunctions and not on the merits of the suit, it is possible the Court will review the issue as well.

On Nov. 3, the Seventh Circuit Court of appeals stayed that decision pending its appeal.

Therefore, the USCIS will apply the public charge final rule for applications submitted on or after Feb. 24, 2020.

According to this post by the Kaiser Health Network, The Biden White House announced that it will review the new Public Charge rule implemented by the Trump Administration.

The regulation makes it harder for legal immigrants to get green cards if they use certain kinds of public assistance including Medicaid or food stamps.

We will keep you posted if there is a final decision by the Biden Administration on whether they plan to keep, change or reverse the Trump public charge rule.

As mentioned above, the federal government recently expanded the definition of public charge.

This change is expected to go into effect on February 24th, 2020.

However, even under this new definition, having used CalFresh before February 24th, 2020 will not impact your chances of being considered a public charge.

Furthermore, whether or not others in your family get CalFresh will NOT impact your chances of being considered a public charge either.

Many immigrants are exempt from the public charge rule, including nearly all immigrants who qualify for CalFresh.

The public charge rule does not apply to anyone who already has a green card, unless they leave the U.S. for more than 6 months.

Furthermore, it also does not apply to anyone who has, or is applying for, one of the following:

Getting CalFresh and the Public Charge Rule

Almost all immigrants who are eligible for CalFresh are not affected by the public charge test.

Furthermore, getting CalFresh while you have or are applying for status as a refugee, asylee, U or T visa, VAWA relief, TPS or SIJS will NOT count against you later if you apply for a green card.

Here are the most frequently asked questions about CalFresh for Immigrants, including the CalFresh Public Charge rule.

Is CalFresh welfare and you are considered a “Public Charge” when you receive CalFresh benefits?

CalFresh is not welfare and it is not cash aid. The program is funded by USDA.

“Public Charge” is a term used to describe an individual who is likely to become primarily dependent on the government for subsistence.

This dependence is determined if the person receives public cash assistance or use of long-term care at government expense.

CalFresh is not cash aid, and you will not be considered a “Public Charge” if you receive CalFresh.

Do you have to be a U.S. citizen to get CalFresh?

No. Some legal immigrants can get CalFresh. See below for a list of eligible
immigrants who may qualify for CalFresh.

Which immigrants can get CalFresh?

A household can get CalFresh if at least one person:

An individual does not qualify for CalFresh if:

However, people who are not eligible because of their immigration status can always apply for CalFresh on behalf of other household members, like US-born children.

If you don’t see your immigration status on here, talk to a local expert on public benefits and immigration.

Does getting CalFresh affect my ability to get citizenship or a green card?

Getting CalFresh does not affect your ability to get citizenship.

This is because the public charge test is not a part of the process of applying for citizenship.

Furthermore, it also does not affect most people applying for a green card, except in very rare cases.

This is true because almost all immigrants who are eligible for CalFresh are exempt from the public charge test.

If you still have questions, consult an attorney who is knowledgeable about public benefits and immigration.

What documents will I need to provide to get CalFresh?

Here are the documents usually required to get CalFresh:

Immigrants may also be asked to provide:

If you are applying only for other people in your household, you don’t have to provide proof of your immigration status.

Can Children of undocumented immigrants get CalFresh?

Yes, children of undocumented immigrants can get CalFresh if they are
citizens or legal permanent residents.

Will I have to pay back CalFresh Benefits if USCIS finds out?

People who get CalFresh in the right amount do not have to pay
them back.

That is because if you get CalFresh because of wrong information, you will have to pay
them back.

If someone in my family is undocumented, can I still apply for CalFresh?

Yes, and here are a few helpful points to consider:

First, undocumented parents can apply for children who have citizenship or eligible immigrant status.

Additionally, CalFresh does not share information with immigration enforcement officials.
You can tell your caseworker that a non-citizen in your family does not want to be considered for benefits.

Also, once you do that, your caseworker is not permitted to ask for proof of their immigration status.

Furthermore, you do not have to provide proof of immigration status for anyone who is not applying for benefits for themselves.

However, it is important that you are honest about your immigration situation (and everything else) when applying for CalFresh.

Since 1999, immigration officers have classified the following government benefits are part of determining public charge:

However, the Trump Administration has expanded the list to include the following programs:

The USCIS will apply the public charge final rule for applications submitted on or after Feb. 24, 2020.

The Biden Administration is reviewing the Trump public charge rule changes and it’s likely they may be reversed or changed. We will keep you posted.

We hope this post on CalFresh Public Charge was helpful.

If you have further questions about the Public Charge Rule, CalFresh or California EBT Card, please let us know in the comments section below.


Add your SNAP EBT card to Amazon and get FREE access to Fresh grocery selection, and FREE delivery on qualifying orders. Click here for more on How to Add your EBT Card to Amazon.

Shop with SNAP EBT on InstaCart! 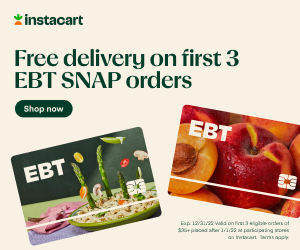